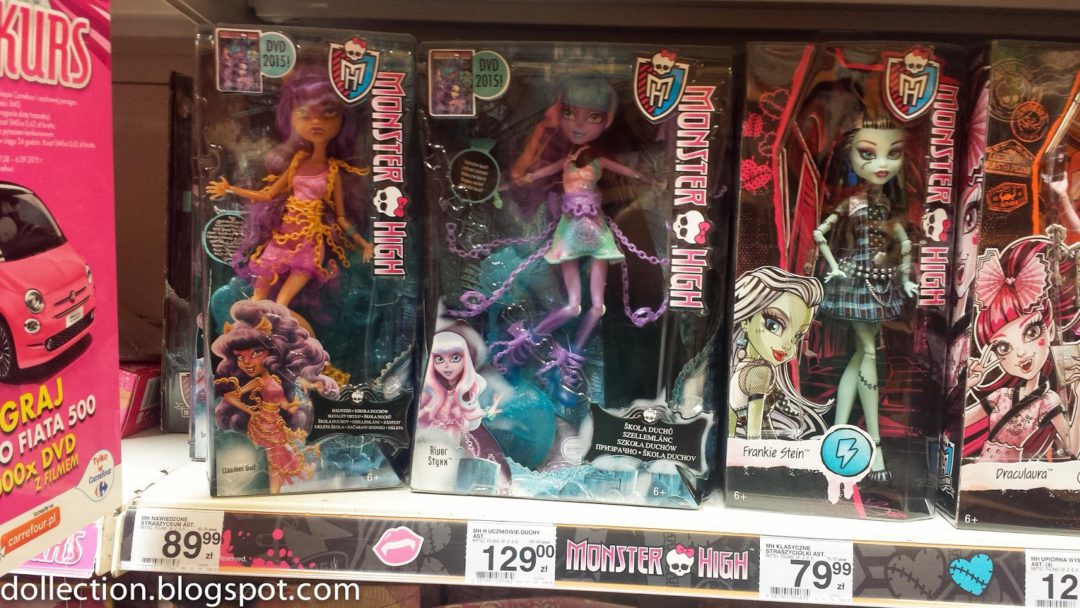 Last week I went for a short vacation to Poland to see my family. To me it was also a great opportunity to check out Polish stores and see which dolls were in stock. I was hoping to see Monster High Boo York Boo York, Freak du Chic and Ghoul Fair dolls and Ever After High Way Too Wonderland and Fairest on Ice dolls. Check out what I’ve found!

I really like this store because they have so many dolls there and they organize sales on dolls pretty often. I saw new Ever After High dolls from the Enchanted Picnic line for 59.90 PLN (~16 USD) and a lot of re-releases of EAH basic dolls for 129 PLN (~34 USD). Monster High Monster Exchange dolls were 129 PLN (~34 USD) as well, while the Gloom & Bloom dolls were 99.99 PLN (~26 USD).

Most of the Barbies were on sale related to the premiere of the new movie Barbie in Rock ‘N Royals.

I’ve never seen these Fashionistas before and they look amazing! They were 89.99 PLN (~24 USD).

The My Little Pony Equestria Girls 3-pack looked adorable and it was on sale for 95 PLN (~25 USD).

I like these Winx Club dolls made by Witty Toys.  They look different from the dolls made by Jakks Pacific but they are very nice too!

They had a lot of dolls on sale there, mostly Monster High dolls, but the dolls were still pretty expensive because most of the things in Smyk stores are overprices from the beginning. Despite this I was thinking for a moment about getting Bella Swan from Breaking Dawn (Twilight series) but I wasn’t in love with this doll’s outfit so I decided not to get her.

I was surprised to have found MLP: Equestria Girls Friendship Games dolls there. I’ve never seen them before and I though that they were not available in Europe yet.

I really enjoyed this dolls hunt even though I didn’t find any new dolls that I was hoping to find. It was great to be able to see so many dolls in person, especially Ever After High dolls, since it is very difficult to find them in my area in Switzerland.

How about you? Have you been doll hunting recently? Did you find any new dolls? Please comment and let me know!

Meet Barbie Style Doll no. 4! 😀 How do you like

Do you have a furry friend? ❔️ Barbie recently

How do you like this cutie? 🦊 I'm sooo in love