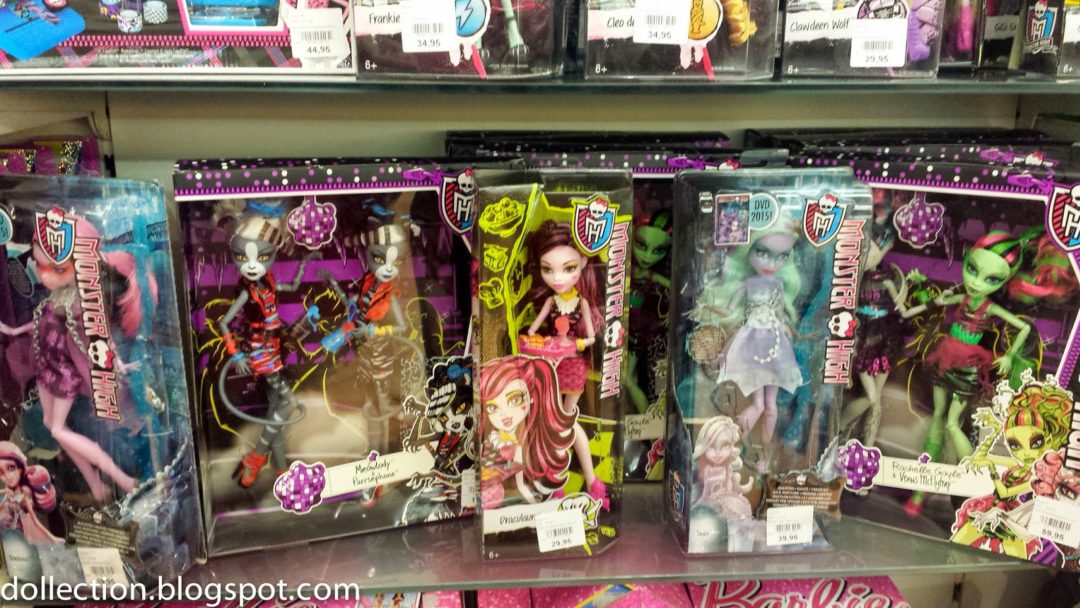 Yesterday I went on a doll hunt! I’ve been to three stores: King Jouet and Coop City in Meyrin and Franz Carl Weber located in Balexert. I was particularly looking for new Ever After High dolls and Once Upon a Zombie dolls. Check out what I’ve found!

There was a massive amount of Barbies at this store, but there wasn’t a single Ever After High doll. I was happy because I’ve finally found Once Upon a Zombie dolls! Unfortunately they didn’t have Zombie Belle, which is the one I want the most. Now I have a dilemma whether to buy Zombie Rapunzel instead or keep looking for Belle.

Check out this amazing carriage with a Bloom doll! I’ve never seen it before and I think it’s awesome.

This is the place where you can still get original releases of basic Apple, Raven, Madeline, Blondie and Cerise. It was the first time I’ve seen basic Cerise Hood in a store (I’ve got my Cerise online). They have also many Monster High dolls, not only from the fairly new lines, but some older dolls too.

Surprisingly I’ve found Tsum Tsums! There were only basic characters though.

There were no Ever After High dolls in this store, but they had almost all currently available Monster High dolls and many Barbies. I really liked the Barbie Style Resort dolls.

I didn’t get anything yesterday but I am still thinking about Once Upon a Zombie Rapunzel. I am trying to limit myself because recently I ordered many dolls online and I am still waiting for them to arrive.

What’s currently in your stores? Have you found some new dolls already, especially Boo York Boo York and new Ever After High characters?

NEW Barbie Fashionistas no. 160 🧡 She has such

NEW Barbie Fashionistas no. 155 💖 Do you want t

2019 Barbie Birthday Wishes 🌹 I bought her when